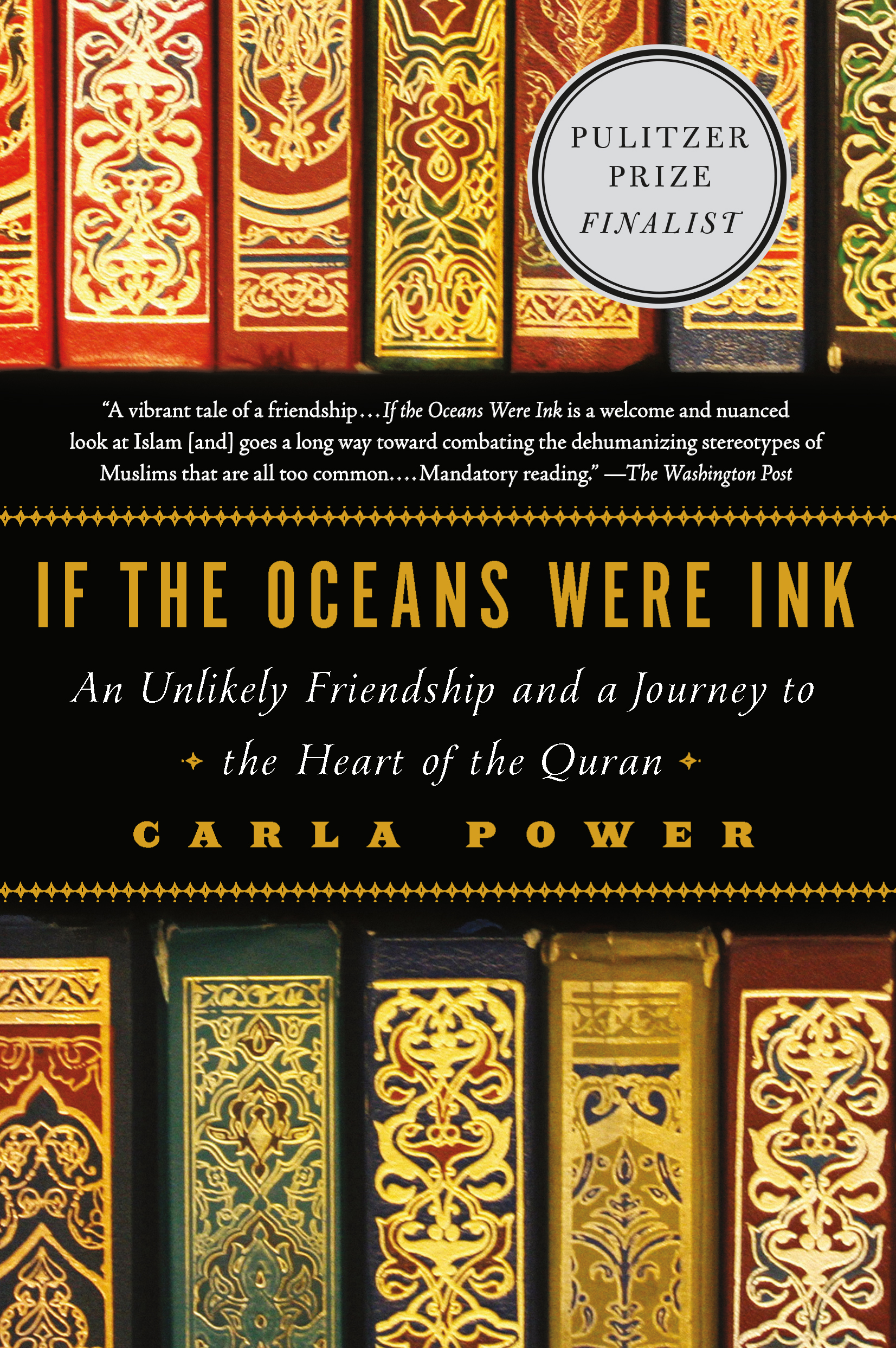 “Should be mandatory reading for the 52 percent of Americans who admit to not knowing enough about Muslims.”
The Washington Post

“Great journalists invite us to be companions on their journeys to extraordinary places. Carla Power offers such an invitation in her new book.”
ISLAMICommentary

An acclaimed American journalist and an internationally renowned sheikh challenge their worldviews—and friendship—to help bridge one of the greatest divides shaping our world today.

If the Oceans Were Ink is Carla Power’s eye-opening story of how she and her longtime friend Sheikh Mohammad Akram Nadwi found a way to confront ugly stereotypes and persistent misperceptions that were cleaving their communities. Their friendship—between a secular American and a madrasa-trained sheikh—had always seemed unlikely, but now they were frustrated and bewildered by the battles being fought in their names. Both knew that a close look at the Quran would reveal a faith that preached peace and not mass murder; respect for women and not oppression. And so they embarked on a yearlong journey through the controversial text.

A journalist who grew up in the Midwest and the Middle East, Power offers her unique vantage point on the Quran’s most provocative verses as she debates with Akram at cafes, family gatherings, and packed lecture halls, conversations filled with both good humor and powerful insights. Their story takes them to madrasas in India and pilgrimage sites in Mecca, as they encounter politicians and jihadis, feminist activists and conservative scholars. Armed with a new understanding of one another’s world views, Power and Akram offer eye-opening perspectives, destroy long-held myths, and reveal startling connections between worlds that have seemed hopelessly divided for far too long.

Praise for If The Oceans Were Ink

O: The Oprah Magazine‘s April issue names If The Oceans Were Ink one of “10 Titles to Pick Up Now”

“For all those who wonder what Islam says about war and peace, men and women, Jews and gentiles, this is the book to read. It is a conversation among well-meaning friends–intelligent, compassionate, and revealing–the kind that needs to be taking place around the world.”–Fareed Zakaria, author of The Post-American World

“Unique, masterful, and deeply engaging. Carla Power takes the reader on an extraordinary journey in interfaith understanding as she debates and discovers the Quran’s message, meaning, and values on peace and violence, gender and veiling, religious pluralism and tolerance.” —John L. Esposito, University Professor and Professor of Islamic Studies, Georgetown University, and author of The Future of Islam

“If the Oceans Were Ink opens a door to the power of the Quran’s lyrical and complex prose to inspire, comfort, and ignite hearts everywhere. A must read for anyone wishing to understand a global community’s central spiritual source.”—Dalia Mogahed, Director of Research at The Institute for Social Policy and Understanding and co-author of Who Speaks for Islam?

“There are many intriguing books that trace the encounter of Westerners with Muslims from traditional backgrounds. Some are love stories, others are clashes. If the Oceans Were Ink is something more radical, magical, and much more relevant: a religious encounter mediated through a gentle friendship, one that is committed to a dialogue and a search for truth. In a world characterized by so much tension and polemic, Power offers what might be our best hope for a better tomorrow: an intelligent friendship. Most enthusiastically recommended.”–Omid Safi, Director, Duke Islamic Studies Center

“This is a story of an extended, transformative conversation in which both participants patiently examine their own, as well as the other’s, perceptions and beliefs. In its telling, the neurotic, globalised narrative of mutual suspicion dissolves into a gentle plea for understanding, for the act of listening with an open heart and mind. If The Oceans Were Ink is a crucial book, serious but also mercifully humorous. Reading it is a completely immersive experience, an opportunity to swim away from the broiling foam of prejudice and ignorance and follow an altogether different current.–Frances Stonor Saunders, author of The Cultural Cold War: The CIA and the World of Arts and Letters

“An informative and engrossing work”—Library Journal

“Engaging…Power’s narrative offers and accessible and enlightening route into a topic fraught with misunderstanding.”–Publishers Weekly

Listen to audio presentation of If the Oceans Were Ink

A Conversation with Carla Power and Sheikh Mohammad Akram Nadwi

Sheikh Akram: How is it that you chose me to be your guide through the Quran?

Carla Power: Well, I chose you, first of all, because we have a history together, as work colleagues and later friends, stretching back over twenty years. But I approached you, too, because this book had a larger goal behind it. We too often find ourselves immersed in communities of like-minded people. There are other Muslim scholars whose outlooks are closer to my own, who are, say, from the West or from progressive mosques. But to study with you, a traditional madrasa-trained scholar, was a listening exercise—a year-long attempt to really understand someone whose worldview was profoundly different from my own.

Sheikh Akram: And why did you decide to study the Quran in the first place?

Carla Power: I’d studied Islamic societies in graduate school, and had written about Islamic issues as a journalist. But in both cases, I wrote about Muslims as part of a social or political group, rather than a people bound together by their belief in a scripture. I wanted to go deeper, and to examine the book that motivates millions. But I didn’t merely want to study the Quran alone, in a vacuum: I wanted to see how it shaped the life of one Muslim family—yours!—and how its words guided your life.

Carla Power: Was there anything you learned from taking on a secular American, the daughter of a Quaker and a Jew, as a student?

Sheikh Akram: We’ve learned from each other over the years. In the beginning, as colleagues at Oxford, you made an effort to improve your Persian, which I helped with; and you had reciprocated by helping me improve my English. More recently, I have been most impressed by your dedication to finding things out for yourself, and then making your own judgments. I hope that some of your ability to get around the cultural baggage that we all carry has rubbed off on me, on how I approach my research and how I bring up my children. I have also learned from you that we are living in a time when there is a lot of misunderstanding and suspicion between peoples, and we need to stop merely complaining and start doing more to really understand and respect one another.

Sheikh Akram: When you came to my public lessons, what was your impression of them?

Carla Power:: I was amazed at the range of roles a sheikh takes on—advice columnist, historian, marriage counselor, philosopher, and more—and I’ve watched students ask you to pronounce on everything from veiling, to the nature of the Divine, to whether they can order take-out from a pizza place that serves alcohol, a banned substance.

I also admired how brave you were in supporting women’s rights and in speaking against the politicization of Islam. At one lecture you gave on Jihad and Sharia Law, it was rumored that there men from an Islamist political group who had all come to give you a hard time. Later, I heard from one of your students that you face this kind of harsh questioning often when you lecture to very conservative audiences at mosques.

Carla Power: Were there any parts of the journey–either of the lessons, or the trip home to Lucknow and Jamdahan in India—that surprised you?

Sheikh Akram: Your journey to my village in Jamdahan was certainly a surprise for me. I did not expect that an American lady would go through the time and trouble of visiting a little village in India, especially in the summer when it was too hot even for local residents. But your determination to visit impressed me and proved that you were very serious about your research, and doing it first-hand. You managed to meet the people of the village and engage with them, and your visit is still very fondly remembered by all.

Sheikh Akram: Do you think the concerns of Muslim women in the West are being addressed?

Carla Power: I think there’s a sea-change underway, but there’s still a long way to go. Muslim women today are also increasingly vocal about their rights and viewpoints, spurred on by various reform movements. I admire your daughters, and also some of your women students, who are now going out and writing and speaking with authority about Islam from a women’s point of view. But as you’ll be the first to remind me, the situation on the ground for many Muslim women is still difficult. Too many families are structured around cultural norms that restrict women’s rights. But you, and your students, are doing your part to chip away at them.

Carla Power: You’re famous among Islamic authorities for many things, but you only came to the attention of a broader audience through your rediscovery of 9,000 historical women scholars. They were extraordinary women, and your work proves that there is nothing Islamic or traditional about shutting women and girls out of schools and public life. Are you surprised to have emerged as an advocate of women, having begun your career as an expert in hadith, the deeds of the Prophet Muhammad?

Sheikh Akram: My study of women scholars in Islam happened really by accident: as I worked on other projects, I kept on finding information about the rich tradition of scholarship among women. I admit I was shocked by the scale of it. My own views also evolved. There are of course existing cultural traditions on the role of women, but I insist that one must follow the evidence without that cultural baggage.

There is not much serious effort in the Muslim world to improve the condition of women using the perspective of experts on the Quran and hadith. That is a good reason for me to continue because my work contributes something to the cause of securing women’s rights and access to education and social justice.

Sheikh Akram: Do you think my teachings benefits Muslims in the West?

Carla Power: I think there’s such a hunger among young Western Muslims to learn from a sheikh like you. You’ve shown your students that Islam doesn’t conflict with being a good citizen in the West; there is no need, as some other sheikhs have suggested, to cut themselves off from Western societies. Many madrasa-trained scholars are also used to traditional hierarchies, and few allow their students to question and challenge them, but you encourage it. Two of your female students even persuaded you to change your position, and you now oppose child marriage. You even credited them when you announced your new understanding in class. For a contemporary sheikh to state publicly that he’s learning from his pupils—it’s astonishing.

Carla Power: You have six daughters, growing up Muslim, British, and with strong roots in India. What do you hope they will bring from each of these cultures?

Sheikh Akram: I am not keen on the dominance of any culture or over any other; it is best if people interact in normal situations and whatever emerges from that emerges. Rather than focusing excessively on one cultural identity or another, their main focus should be to love and worship their Lord, to love their neighbors, to make a positive contribution to the societies in which they live. Also, if they are able to do so, I hope for my daughters that, through their words and their lifestyle, they convey to their society and their own children that the true happiness is the happiness promised hereafter to those who believe in God and the last Day, and do good deeds.